The Samoa Police Prisons and Corrections services marked another milestone in building the capacity and capability of their organisation with the graduation of five police officers last month who successfully completed first aid training for instructors through the Samoa Red Cross Society.

The graduation ceremony was held on Friday 22 July at Samoa Police Command Post and was attended by members of the Police Executive, Secretary General of the Samoa Red Cross, Namulauulu Tautala Mauala who presented a training report and representatives from the Australia Federal Police (AFP) led Samoa Australia Police Partnership (SAPP). 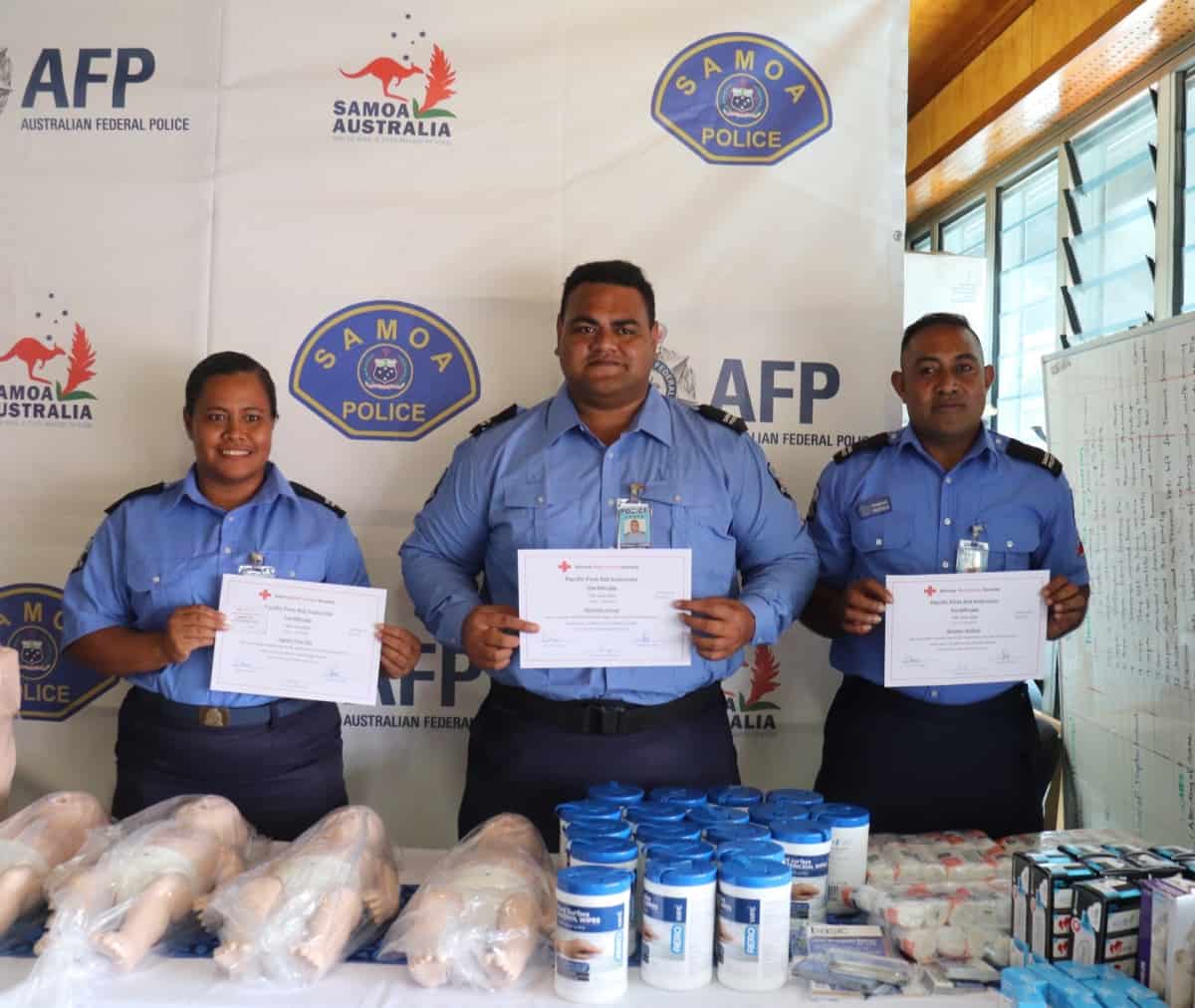 In his remarks, the Samoa Police Commissioner, Auapaau Logoitino Filipo congratulated the officers for their achievement and emphasized how crucial their role will be over the next two years in training and certifying members of the organization including future instructors to ensure sustainability of services.
“I am very proud this afternoon to congratulate the five (5) Police Officers who have completed their training with the Samoa Red Cross Society and who are now certified first aid instructors,” said Aupaau. “I applaud you for your commitment and determination to upskill yourselves personally and professionally.”
“It is my hope as the Commissioner that you will utilize these skills and knowledge to deliver essential first aid trainings to all members of the Samoa Police Prisons and Corrections Services. My message to you is to make use of this opportunity to help the other officers in the Service by providing the proper training in the area of First Aid. In this way, you are serving your organization and also giving back to Samoa and our communities.” 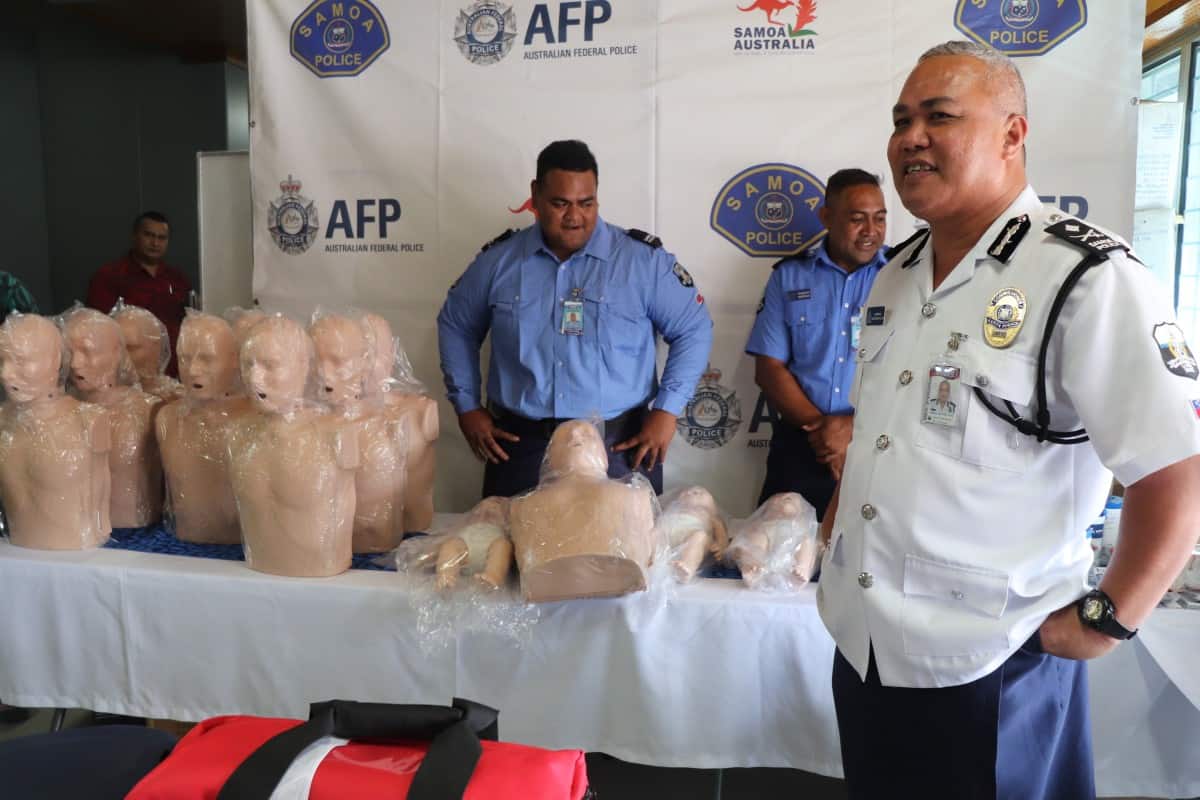 Over the last decade the SPPCS has outsourced first aid training of their officers to the Samoa Red Cross Society but due to budget constraints the number of officers trained and certified were limited. With the certification of five instructors within the organization, the organization received a significant boost in its autonomy to provide this service which will ultimately benefit the public and help save lives.
“It has always been the aim of our Service to serve the people of Samoa and our communities by delivering the best professional services.” said Auapaau.” In order for us to do that effectively, we need to build the capacity and capability of all our Police Officers. Police Officers are mandated to protect life, therefore I feel as the Commissioner, that it is important for our officers to be competent in first aid training as they could be the first responders to any incident that may occur within Samoa.” 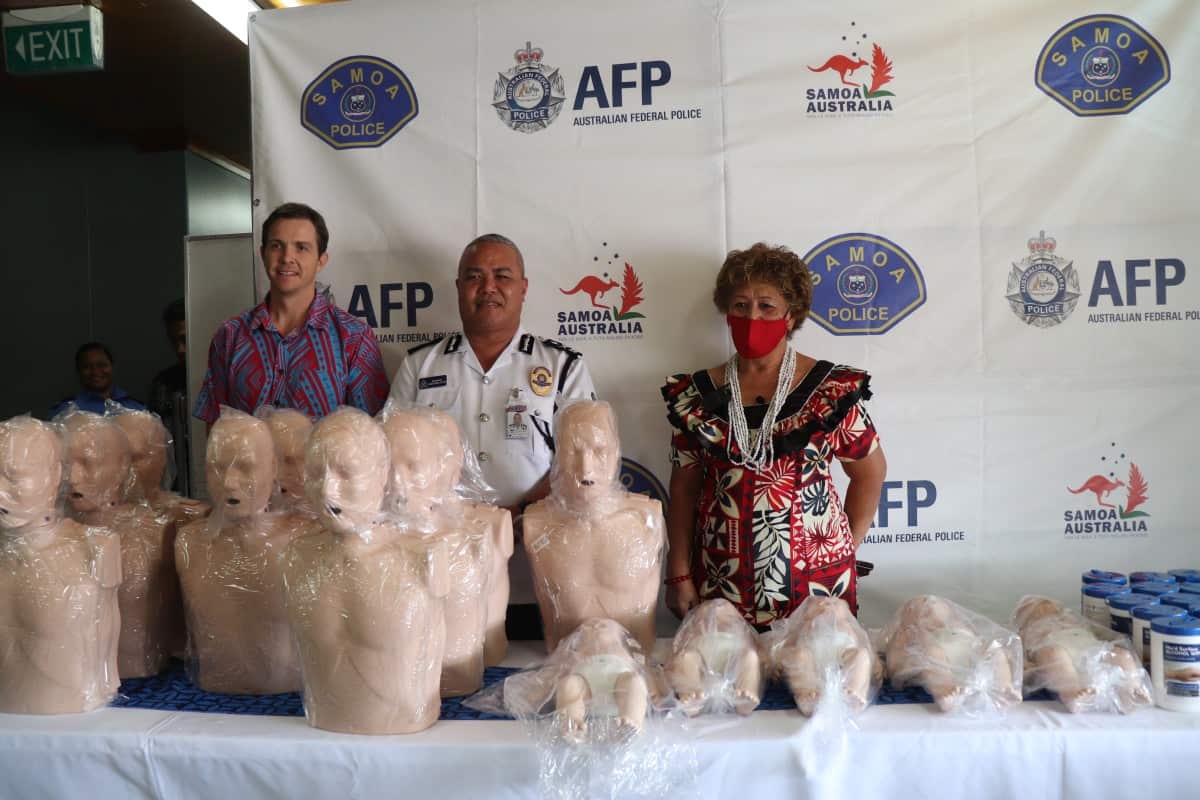 The first aid training for instructors was part of an initiative funded by the AFP led Samoa Australia Police Partnership Program (SAPP). The total fund came to SAT $150,000 which also covered the provision of training for 900 SPPCS members who will receive an internationally recognized 2 year certification as well. In addition the SPPCS also received first aid training equipment, instructor uniforms, and first aid manuals. In his remarks, Auapaau conveyed this thanks to the AFP for their ongoing support to the SPPCS.
“These training opportunities would not have been available to us without your (AFP) direct financial support and co-operation in supporting us in our vision for the organisation We thank you for recognizing the need and enabling the opportunity that will benefit our organization in the long run”